Monday, residents were cleaning up after severe weather ripped through the Triangle, leaving some neighborhoods in shambles

Durham and parts of Orange County were some of the hardest hit areas, with numerous trees down onto houses and busy streets.

The storms ripped off branches, split trunks and left thousands without power.

Lawns and roads across central North Carolina were scattered with branches, limbs and even full trees.

Several reports of trees blocking roads have come in from areas like Wake Forest and Sanford.

A tree on Hamilton Road, about a mile and a half away from the University of North Carolina at Chapel Hill, snapped in half falling on top of a nearby apartment.

The tree, completely uprooted, landed on a bedroom in the apartment

A 13-year-old girl was in the living room at the time, though thankfully was unharmed. 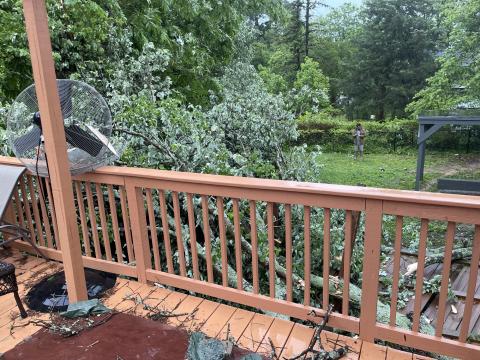 Reports of damage is also coming in from the Durham area.

A tree fell into a home there leaving what the residents say was 10 holes in their roof. A brand new Tesla was also totaled when the tree fell.

And just two houses down, their 90 year-old neighbor stood just feet away from where a tree took out the back of his house.

And all of that heavy rain brought flooding. It took over on Hillsborough Street, and then it slowly went away.

Utility crews are working to address power outages around the Triangle, with Duke Energy reporting over 7,000 outages in the Durham area alone in the immediate aftermath. Some residents were told they may not have power until tomorrow

With a second round of storms expected Monday evening, flooding will become a major concern for the area.

It is unknown at this time if there have been any injuries as a result of these storms.

At least 3 people shot in second shooting in 2 days in Clinton, witness says