Cary, N.C. — This week marks the opening of the movie theater in the town of Cary’s nearly $1 billion Fenton development.

Florida-based Paragon Theaters is officially opening its seventh location – and second in Cary – on Friday at 21 Fenton Main St.

“We’re an ultimate entertainment destination,” said Paragon Entertainment Group Vice President of Marketing and Public Relations Jared Comess. “I’m a ‘cinefile.’ I’m a person who is really big into movies. [I have] been my whole life.

“Knowing that I can come here and have my creature comforts of my private, affordable luxury that I can afford and that the ticket is not too step, but I can see the movie in the most pristine way that it’s supposed to be screened, that, to me, does it.”

The theater is offering tickets at $6 for a limited period of time as it opens. Comess said he wasn’t sure how much ticket prices would increase after the summer promotion ends. The company’s Delray Beach, Florida, location offers adult tickets starting at $11.77.

Comess said Paragon’s newest location in Cary has seven movie screens with a total of 780 seats.

“By the time the residents move in, I think the theater is going to be actually too small,” said Into the Blue Creative Business Agency President Sharon Patterson.

The theater was initially supposed to open in April, and Comess said people began stopping in this month, asking when it would open. Many businesses in the area and across the country are dealing with supply-chain issues, rising costs and labor shortages.

“We had some staffing challenges in the beginning, but … because we have two locations, we were actually able to hire earlier than we normally would, and we were able to train staff at our other location,” Comess said.

“This is the first time that we’ve ever had theaters really this close to one another, but this location came up, and we had to jump on it because we just knew that just with urban growth here, and knew the size of this project, and getting the opportunity to build from the ground up, and put all of our bells and whistles into it,” Comess said.

“We’re the anchor,” Patterson said. “That’s a good position to be in until the grocery store, which is still probably – who knows? – a couple years, we’re going to be the anchor. What a great position.”

There are plans to build a grocery store in the Fenton development.

For now, the luxury theater has a grand opening weekend. A private event is scheduled Thursday evening, but there are some tickets available for “The Black Phone”; “Elvis”; “Lightyear” and “Jurassic World Dominion.”

On Saturday, the theater is planning a “Minion Mania” event as the new movie hits theaters this weekend. Activities in the square are free to attend.

“We work on repeat business, so we to make sure everyone is happy and comfortable,” Comess said. 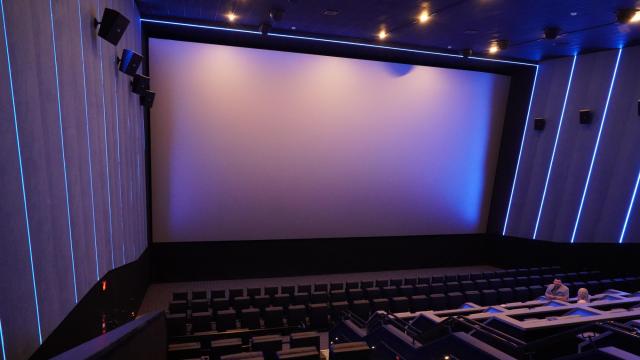 The Axis15 Extreme Theater features a 66-foot screen, Dolby Atmos Immersive Sound and LuxBox pod-style seating. The screen is the largest in the Triangle.

“This isn’t a take-it-home experience that you can duplicate,” Patterson said.

The Axis15 Extreme Theater seats 180 people, and the screen is tilted 15 degrees forward.

“You feel like you’re pushed into the movie, and it’s just a wonderful experience,” said Into the Blue Creative Business Agency Vice President of Client Relations and Media Lauren Ricks.

“It puts your spine in the best possible position in a recline, so it’s the least amount of pressure on your spine,” Comess said.

Each seat has a QR code to allow moviegoers to order food, wine, cocktails, beer, mocktails and other concessions. A Paragon Theaters employee will make the delivery to the person who submitted the order. It allows moviegoers to get a refill or concessions without leaving their seats.

Also, each moviegoer is assigned a specific seat upon purchasing a ticket.

“You don’t have to make plans,” Ricks said. “I know where I’m going to go to eat before or after [the movie].

The bar is owned by Paragon Theaters as of March, according to Comess.

It is a 100-foot, indoor-outdoor bar with a fire pit and lounge area, offering 40 draft beers and craft cocktails. Someone wanting to eat or drink at the Agency Bar and Social does not need a movie ticket.

“We try to make it very intimate,” Comess said. “Again, we’re more about the film-going process and experience.”

While customers can go up to a booth to order tickets and concessions, the theater also offers touchscreens.

“All the seats are reserved, so you don’t need those large lobbies where people are waiting in line, hoping to get a seat, hoping to get a good seat,” Patterson said. “So, this is really just to drink and enjoy [and] to mix and mingle.”

The technology is designed to enhance the guest experience.

Paragon Theaters offers a large outdoor screen for customers next to the Agency Bar and Social. Comess said customers will be able to arrange outdoor furniture around the screen to gather and socialize.

CMS superintendent wish list: What do Charlotte nonprofits want in next education leader?